The new five-year extension is in addition to the Fifth-Year Option the Falcons exercised in April 2016. Atlanta now has Trufant locked up for the next six seasons. Trufant, one of three brothers who played played corner in the NFL, would be 31 when this contract expires and would become a free agent again in 2023.

The new money average ($13.8M) makes Trufant the fourth-highest paid cornerback (excluding Trumaine Johnson’s Franchise Tag) in the NFL. His contract has the third-highest total value and the fourth-highest guaranteed money at the position.

Trufant’s Fifth-Year Option would have paid him $8.026 million (guaranteed for injury right now) in 2017. Instead, he’ll be receiving over $24 million by March 2018. The former Washington Husky will earn $42.026 million over the first three years of the deal.

This $7.5-million option bonus is due on the third day of the 2018 League Year, and it’s guaranteed for injury at the time of signing. It’s not yet known whether there is a Non-Exercise Fee attached to it, but with half ($4.25 million) of his 2018 base salary guaranteed for skill, cap and injury anyway and the other half becoming fully guaranteed on the same day the option is due, the bonus is essentially fully guaranteed.

The base salaries in the final three years have no guarantees.

The dead-money-to-cap-hit ratio keeps Trufant safe through three years. The first real out for Atlanta is in 2020; the team can save $7.75 million in cap space by releasing Trufant (and can save even more if he’s given a Post-June 1 designation), although that’s also unlikely absent (knock on wood) injuries or a large digression.

If the team did decide to part ways with him and eat the $9 million in dead money before the 2019 season, it would have to do so before his 2019 base fully guarantees on the third day of the League Year. In this very unlikely circumstance, Trufant would be granted his freedom early in free agency, which is when the most money is available. 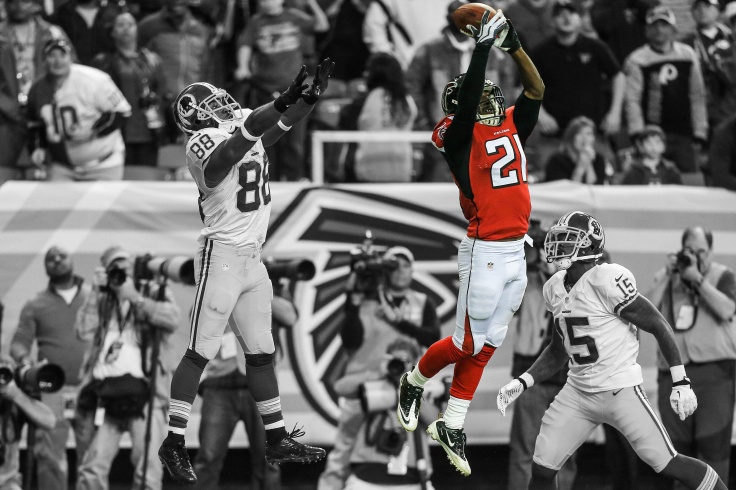 Trufant ended his 2016 season on injured reserve due to a pectoral injury, but his value wasn’t forgotten by Atlanta. He’s one of the league’s best young corners and was paid the going rate for a talented number-one corner. His new money average was higher than both Stephon Gilmore and A.J. Bouye, both of whom were unrestricted free agents this March. With over $14-million per over the first three years, Trufant and his team did well.

With this deal, Atlanta has locked up both its cornerbacks from the 2013 NFL Draft; the team signed Robert Alford to a four-year, $38-million deal this December.