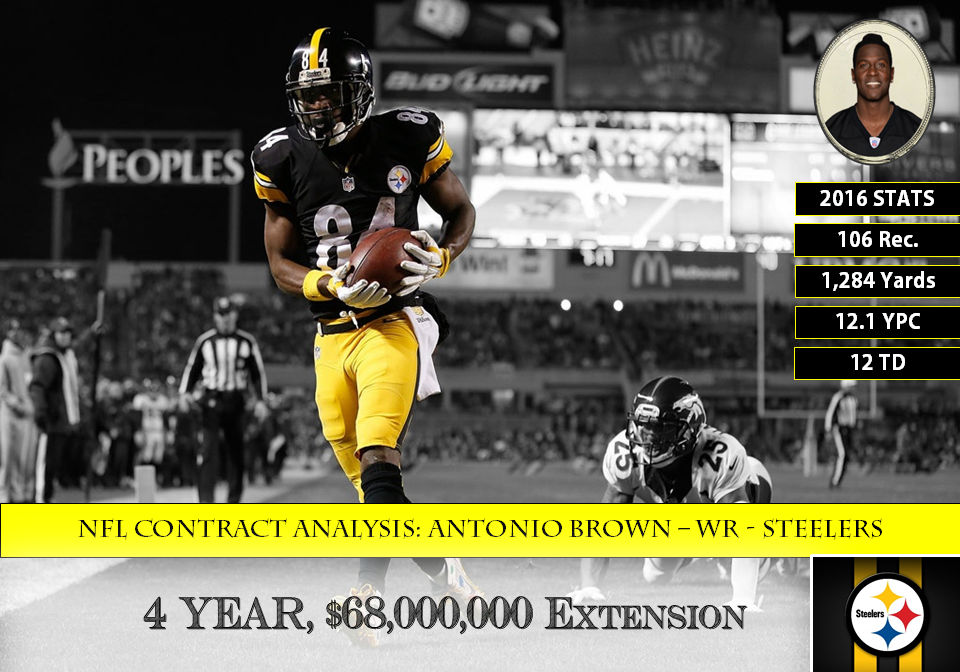 Length – 5 Years
This contract is a four-year extension on top of the final year of his prior contract. The total five-year length is on par with every other major wide receiver contract (i.e. Julio Jones, DeMaryius Thomas and Dez Bryant). This deal will, more than likely, be the last top-of-the-market deal of Brown’s career, given he’ll be a 33 year old playing a young man’s position by the end of it.

Compensation – $68M (New Money)
The $68M of new money means $17-million per year, which makes gives him the highest average salary for a receiver in NFL history. It puts him $2M per year higher than AJ Green, who previous set the market at the position ($15M). Brown is now under contract for the next five seasons and will make a total of $72.71M during that span (or $14.54M per). $4.71M the total value stems from the final year of his previous deal.

Guarantees – $19M Fully Guaranteed
Brown’s $19M signing bonus will probably end up being the only fully guaranteed money in this contract. The Steelers don’t typically ever guarantee base contract years, so the conditional guarantees (when they become available) will almost certainly be less than the other receivers at the top of the market. However, the large signing bonus can, more often than not, practically guarantee the first few years in the deal due to the dead money in the contract.

The Steelers could, in actuality, save money ($2.475M) against the cap if they refused to pick up Brown’s roster bonus in 2018, but accelerating the 2018 dead money to save less than $2.5M seems extremely unlikely. Given the deal-money to cap-savings relationship in this deal, it’s almost assured that he’ll be on the team through the 2019 season. He’ll earn $48.9M over the first three years of the contract ($44.2M in new money).

The 2018 and 2019 roster bonus deadlines are beneficial for Brown because it forces the team to make a decision on Brown during the first wave of free agency. Teams spend a majority of their cap space early on in the free agency period, and Brown wouldn’t want to wait too long to put his name in the mix. The third day of the League Year would have been nice, and days after the Super Bowl would have been ideal, but the fifth day is early enough to still cash in should the Steelers move on.

$8.9 million of Brown’s 2017 prorated money (and 2017 cap hit) stem from Brown’s old contract. The large P5 salaries in the later years of the deal allow Pittsburgh some room to restructure his new deal and create quick cap space if ever needed.

Brown deserved to be the highest paid receiver in football to past accolades and future contributions. There Steelers don’t guarantee future contract years, but it would have been nice to see Brown leverage some for the sake of future Steeler free agent contracts (*cough* Le’Veon Bell *cough*).